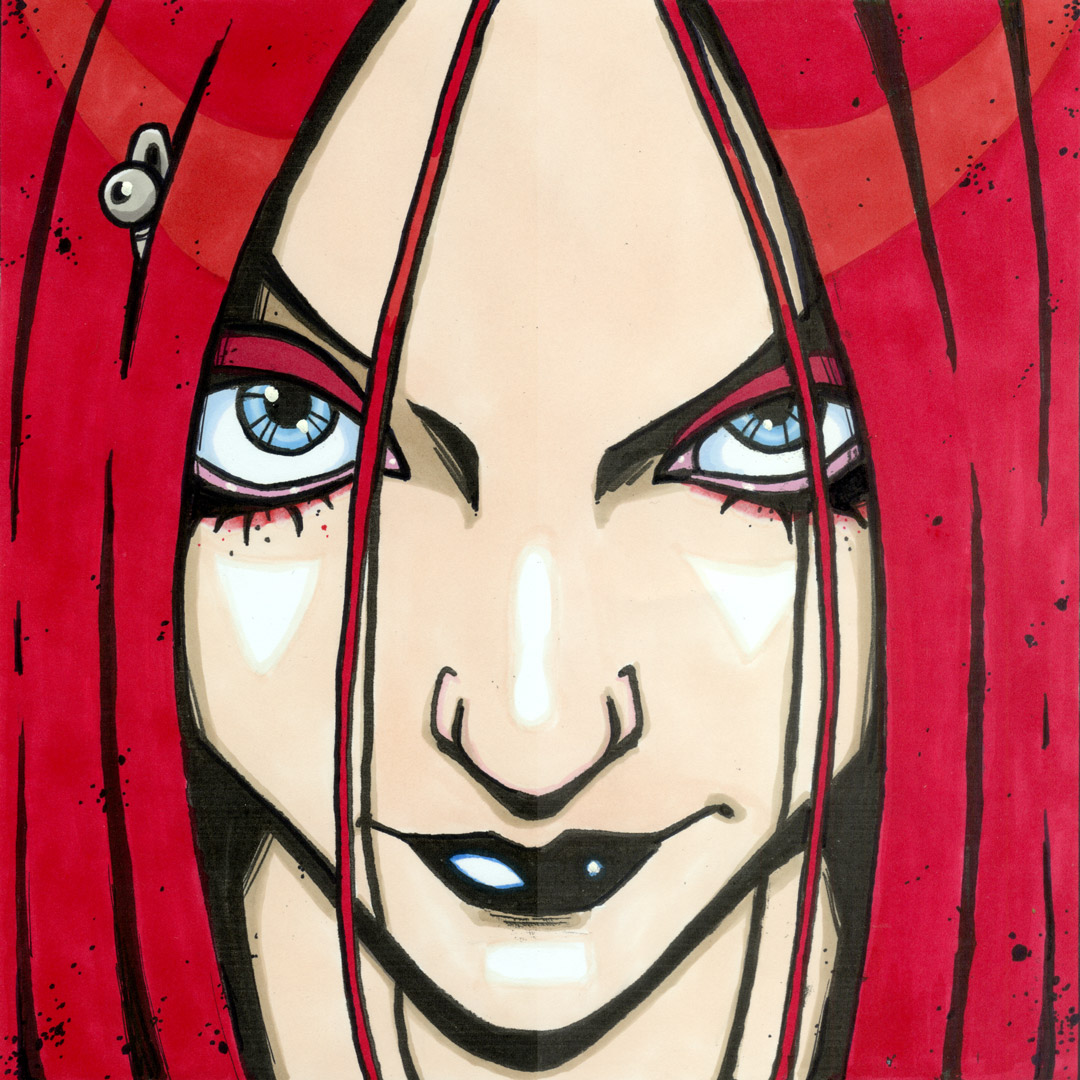 HEY, HOW’S it goin’ out there in Human Flesh World!First off, cheerz an’ thanx to one an’ all for the endless stream of compliments regardin’ both this website an’ sister Instagram page. I mean, we of course deserve it, but, it’s still nice to hear. And, we ARE listenin’ to yer suggestions regardin’ possible future T-shirt designs, like the Instagram pic of me an’ Web swappin’ spit, the ’Am I Weird?’ pic and ‘The Secret Cheese An’ Pickle Sandwich Club’.  But, guys… THAT’S a SECRET! Which part of that aren’t you gettin’??? Tsk.  Oh, an’ one person demanded a Marionette T-shirt. But, y’know, we here at B&P DO NOT negotiate with hoaxers. 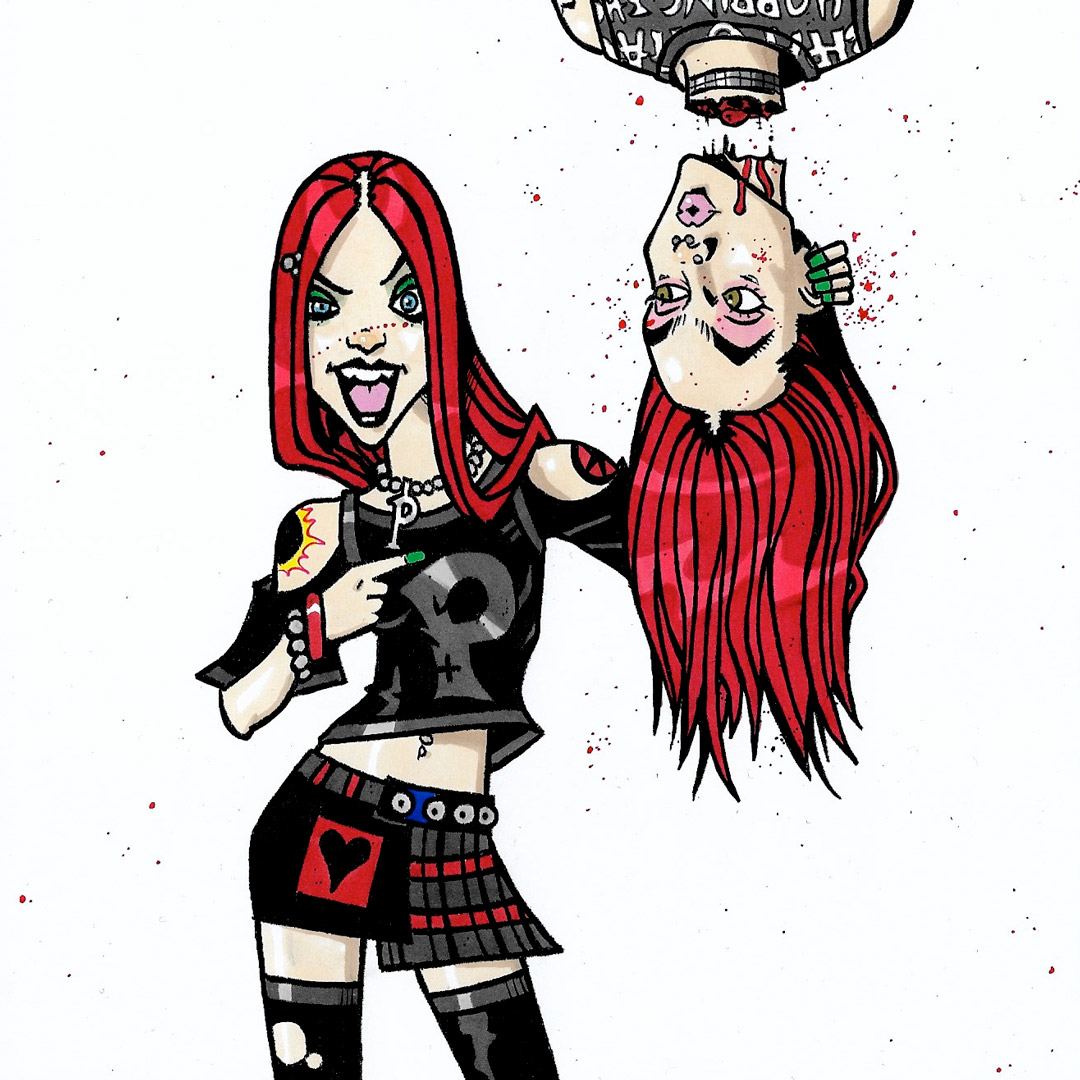 WEDNESDAY ADDAMS! Girl got the moves! Cannot stop eyeballin’ the dance scene from the ‘Woe What A Night’ ep,  which takes place at the annual Rave N’ Dance at Nevermore Academy! Wednesday shakin’ ‘er bits to to The Cramps!? It’s tooo much! No, I correct myself, it’s TOOOOO FUCKIN’ MUCH! Timothy  Burton – yer KILLIN’ ME! And the choreography – spliced together from all over the Goth gaff, is…to DIE FOR! Sexy as HELL! And not to mention ooky an’ kooky.

LOZEAK. The TikTok Titanesss says her mesmeric new single ‘Cutthroat’, is about bootin’ toxic people outta yer life. Me, I don’t invite ‘em in, in the first place! Still, I’m lovin’ the accompanyin’ pic to the toon; this Norwich lass is really gettin’ a-head in the world. Did I really just say that? I did, didn’t I. Move swiftly on, shall we…

BABYMETAL. Silence is golden. For their Japanese shows in Jan, the gals are gonna section off an area, which is to be called the SILENT MOSH’SH PIT. No shh-it! In this designated pit, fans will be encouraged to not inconvenience other gig-goers by talkin’ loudly, shoutin’ or cheerin’. Internalise that fun! Contain that excitement!

HUBBY AND THE GANG. Violence is golden. I’m bein’ spoilt; after the Linda Lindas gettin’ all Festive on our asses, now Hubby And The Gang have stepped up to the Xmas dinner plate with ‘Violent Night (A Christmas Tale)’! And what a Punky Glam stomper it is! Would that make it ‘Pam’ or ‘Glunk’? Whatevz, it works, churnin’  bass et al! Front-geezer Charlie exclusively tells me, “I wrote it in my bleedin’ van, freezin’ bleedin’ cold, cos I’m tired of hearing’ the same bleedin’ four songs on repeat over the season”. Better make that FIVE, Charlie-boy, as this baby is goin’ in the mix right alongside Mariah, Wizzard, Mud an’ Slade! IT’S CHRIIISTMAAAAAAAS!

GUNS N’ ROSES. Droppin’ the mic. Followin’ an Australian lady bein’ hit in the face by the mic Axl tossed into the crowd after final toon ‘Paradise City’, the frontman says he’s no longer gonna perform the ritual. Says Axl,“In the interest of public safety, from now on, I’ll refrain from tossing the mic to the fans”. Which is both sensible and a shame. I mean, Ax, mate, why do you have to ‘toss’ it? Couldn’t you just place the mic in a nice gift box an’ gently hand it to a crowd member?

DEVIN TOWNSEND. These B&P columns are s’posed to be about fun, but, sometimes the reality of reality rears it’s ugly head an’ ya can’t ignore it! The Devster has been talkin’ ‘bout tourin’ bein’ more expensive than ever. “There’s no way to keep it within cost,“ he sates,” – there’s NO WAY”. It’s soberin’ and it SUCKS! So, the next time yer at a club gig, just remember to appreciate the struggle that band may have gone through to entertain you for a night. For those about to Rock – we salute you more than ever!!

ALICE COOPER. Billion Dollar Baby. Everyone’s fave shock rocker recently staged the Annual Christmas Pudding Fundraiser in Arizona! And, no, I’m not puddin’ you on – it’s a REAL event! Big Al does it every year, hence the ‘Annual’. Said an excitable Coop regardin’ the excitement, “We are excited to be celebrating our 2Oth year with a stellar line-up of talent who dedicate their time and passion to help us raise funds for our Rock Teen Centers”. Exciting guest-stars included Rob Zombie an’ Sammy Hagar. So, yeah, good on Alice, musta raised a quid or two.

TWISTED SISTER. Released by Rock And Roll Beauty, it’s what every girl’s been waitin’ for – a Twisted Sister makeup collection! And, apart from the garish slap, the limited-edition range also includes cosmetics bags, nail decals and, bizarrely…a mirror!? I, of course, wasted no time in gettin’ Mr Dee Snider round to personally embellish me with the subtle shades.  And, voila – Xmas Panto here I come!

Auntie, did anythin’ ever piss you off about the way Zell portrayed you visually?

Probably me tits. Sometimes they looked like two concrete footballs in a hammock. How ‘bout’choo?

Yeah, it’s just so ridiculously small, an’ looks like a ski-slope from the side! Like a fuckin’ Disney Princess! I’d like a nose more like PJ Harvey. Also, my nostrils are insane…you just can’t get a finger up there!

Yeah, well, I like my dinky schnoz. Plus, I came to a compromise with Zell about the whole finger/nostril dynamic.

Yeah, I asked him to draw me slimmer fingers.

Welcome to our nightma.... we mean SHOP Dismiss